Hey everyone, the year's off to a very busy but promising start, so I'll just cut to the news and not babble too much this time.

Just before the holidays, the Predators and Editors Poll was opened, and the best of 2012 were voted on for two weeks. In the author category there were 75 nominations, and many of them very popular and well known authors - to my utter amazement I won the poll and was named Best Author of 2012.

I've also decided to extend my work range a bit this year and to that end, I have joined the staff at Coffeetime Romance, so you'll be seeing me popping up there from time to time, as well. I have a very cool new page there now:
http://www.coffeetimeromance.com/Reviewers/Denyse.html

I have a new release coming out on February 1st called Reckless Assignation. This will be my third release with Ellora's Cave, and it's a brand new version of an older story from years back. Here's a quick look at it: 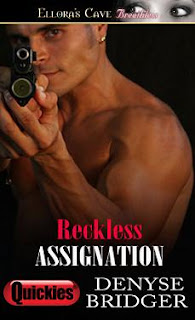 Blurb: A haunted and abandoned hotel on Halloween is the setting for a very private party between two lovers, one of them a world-class, sophisticated intelligence operative who’s trying to teach his young and innocent lady that curiosity can sometimes take you places you’d be better not to go. Amid elaborate trappings meant to scare and entice, Rick’s seduction takes some unexpected but wickedly wonderful twists. But, Rick also has a lesson to learn, when his past collides with his present, and almost destroys everything he cherishes most.

The old hotel was eerie in the approaching darkness and she was finding it difficult to hold on to her resolve to do this without calling Rick. There’d been a weird message on the machine when she got home—something about discovering a secret she needed to know. The voice had sounded slightly familiar, although she couldn’t quite pinpoint why. There’d also been just enough mystery in the vague words to arouse her interest. The entire situation—the call and her coming here to this deserted hotel—reminded her of something she’d heard of once, but her efforts to pull it from memory hadn’t been remotely successful.

She should know better than this.

She couldn’t escape the twinge of conscience that reminded her how often she played out of her league. When her father had retired from the Agency and started his own private investigation business, he’d thought his daughter would be safe from the ghosts of his violent past. More than once, though, Cinthya had paid for the deeds and decisions of Joshua Bradley’s previous career. This could well be another such setup, and here she was walking right into it. All she had in the way of consolation that she wasn’t about to get herself killed, kidnapped or worse was the deeply rooted intuition that this wasn’t what it appeared. The vague sense of familiarity she felt gave a small sense of security.

Her relationship with Rick wasn’t a point of reassurance either in the creaking darkness of the forsaken hotel. There were people who knew him and his reputation, and often it was a point of protection, but here that was irrelevant. It was with Joshua’s very reluctant blessing that his twenty-year-old daughter had stepped into a loving relationship with his business partner, the shadowy, sophisticated and lethal Rick Leighton. The ten-year age difference was only the first objection her father had voiced when Cinthya had been forced by her own conscience to open up to him—conscience and the undeniable need to share her happiness with the other important person in her life.

Rick’s recent decision to leave Bradley’s Private Investigations and reenter the life of an active Company operative set up an entirely new array of potential dangers for Cinthya. It was a risk she was more than willing to take, but not something that lessened the worry from her father and Rick.

Cinthya couldn’t help but wonder what Rick or her dad would have to say about her accepting a cryptic message to meet an unspecified contact—alone—in an abandoned building. Was she being deliberately stupid or was she actually safe? Damn! She couldn’t decide. Instinct and good sense were at war here.

She leapt back in fright when something clingy and featherlight brushed against her face. With a cry of disgust, she batted away the filmy cobwebs and peered into the shadowy stairwell. She was on the second floor, which mean she only had one more flight to climb. Then she’d have to find room 313.

Against her will, some of the things she’d heard about this old wreck of a building began to pop into her head. Some people claimed the Mayfair Hotel was haunted, and those who lived in the area could tell endless stories about “sightings” and other mysterious events in the ancient edifice... Read more here: http://www.ellorascave.com/reckless-assignation.html

I've also been setting up a lot of new places to be found - like I'm not all over the place now, I know. So, you can check these pages out if you'd like to take a peek: 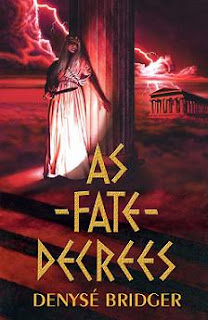 Found a rather awesome review of my fantasy novel, as well - this one is only now available in eBook format at all the big retailers: A 4.5 ribbon review is amazing, check it out HERE

Also, my last release was my second Duet with the lovely and talented Brigit Aine - we decided to bring a little Christmas Magic to life and chose to write a set of connected stories with a common gift as the link between the generations. 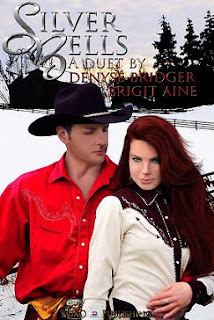 Connected by several generations of family tradition, a gift originally given back in 1878 finds its way into the hands and heart of the newest addition to the Hamilton family. The silver bell earrings are an heirloom blessed by love, and once again the magic of the holiday combines with the magic of the heart to unite lovers touched by Destiny.

Blurb: Enroute back to his home in Montana, Joshua Hamilton is bushwhacked and left for dead. As stubborn as he is strong, Josh makes his way to the nearest homestead, and meets Sara Grant. Left alone after travelling to reside with her brother and his wife only to lose them to illness, Sara nurses Joshua back to health, all the while trying to deny the tender awakening of love. As the holiday approaches, danger arrives to threaten the future they haven't even begun to share.

Blurb: Stephanie is worried that starting over, by moving to Wyoming to work for a guy she's never even talked to, might be a bit extreme. Cole doesn't know what to expect from his new cook, but he hopes to take some of the work load off his mom. Together, they learn that fate is at work, and with a little Christmas Magick, all will be well.

And, for the Facebook fans, I'm writing a novel with a partner - but doing it in a group as a "live" project. If you'd like to watch it unfold and interact with the characters, please join us here: https://www.facebook.com/groups/NewYorkMinutes/

Last bit of news for this month is also very good. As some of you know, I had a short novella published with Noble Romance a few years back, but only the one title was ever submitted to them. I've recently renewed my relationship with Noble, and I am hoping that my first new novel of the year will be contracted with them over the next month or so. My goal this year has been to focus on novels - I have three planned, with a possible fourth outlined and waiting. There will be fewer releases this year, but I hope most of them will be longer and better books that everyone will enjoy. I've also signed on to be part of a special new line with Ellora's Cave, and that story is tentatively being called "Spice and Gypsy Magic" and promises to be a lot of fun! I've also been commissioned by XoXo Publishing to write a story called Jackpot City which will be part of a very special sponsorship project - so if you like a little James Bond thriller, you will probably love this novella, as well!! More details soon!

May your days be Blessed with happy hearts and fulfilled dreams - today and always. See you again soon - and thank you all for your continued support and interest.