Thanks so much for having me here today! 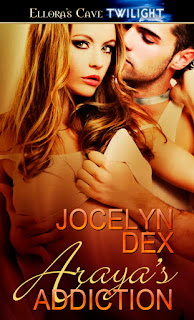 Here’s the blurb for Araya’s Addiction.

When Kean wakes up naked, collared and locked in a cell, he knows thinking with his dick has finally gotten him into trouble. Kean, part Incubus, enjoys scorching and frequent sex. One night, he finds himself a prisoner forced to help a Sempire rescue her daughter from certain death.

To gain his freedom, Kean must provide Araya with his semen to save her life, but she refuses it, even though the lust between them is undeniable. Determined to escape and to help Araya, Kean ups the stakes and forces Araya into a situation that makes it impossible for her to continue refusing him. Feeling betrayed, Araya enacts a scheme to get Kean out of her life. Her best laid plans may awaken emotions that will bind them to each other forever.

And here’s an excerpt from Araya’s Addiction.

Kean’s body ached in ways he’d never experienced—a burning, piercing agony. A groan escaped his lips as a cooling sensation comforted his neck, then his brow. He struggled to remember what he’d done to make himself feel so horrible. Had he pulled a massive drunk and this was the worst hangover of his life?
“Are you awake?” A small, feminine voice asked.
Wait. Had he brought a female home with him? No. He didn’t bring females to his home. He went to theirs so he could get out when he wanted. He must be hung over at his latest conquest’s home. Why couldn’t he remember anything? He struggled to open his eyes. Damn things felt glued together.
He growled as soon as his eyes focused on the frail female bent over him and the memories flooded back to him. What the hell had happened? What had the demon done to him? And wait, why was she wiping him down with a damp cloth?
“What’d you do to me?” he croaked.
Her eyes widened. “Nothing,” she said in a small voice, the weakness in it unmistakable.
“Bullshit.” He tried to sit up but his head pounded and spun so he stayed down.
“You’ll feel better soon. Just don’t try to hurt me again.” She stood on shaky legs and ambled to the bed where she selected a pillow and brought it back to where he lay. She wore nothing but a short green satin robe. She helped him lift his head enough to slide the pillow under and then placed the damp cloth across his forehead.
The small effort she’d made seemed to have exhausted her. She sat on the floor a couple feet from him, knees pulled to her chest, her chin resting on her knees and her breathing strained. He could snap her in half with two fingers.
“What’s your name?” she asked him.
He ignored her question. “Shouldn’t you be scared right now?”
Her lips lifted at the corners. “Scared of what? A helpless, naked man laid out on my floor?”
Oh yeah. He forgot he was naked. Hell, she could at least look a little embarrassed. But helpless? Him? Hell no. His male pride forced him to stand even though every muscle in his body screamed in protest, and his head felt as if an ice pick was being shoved into his gray matter. He swayed on his feet, but damn it he’d stay standing if it killed him. “Kean.” He answered her earlier question through gritted teeth.
She clucked her tongue as she stood. To his satisfaction, she also swayed, although he didn’t know why.
“I’m Araya. Why don’t you have a seat before you fall?” she suggested. “I think I’ll do the same.” She moved to the bed and lay on her side facing him.
He chose the chair closest to him, not because it looked most comfortable, but because he felt he would collapse at any second.
Again he asked, “What did you do to me?”
She sighed. “It’s the collar. As long as you don’t try to harm me or my family, you won’t experience that pain again.” She frowned. “You’re stronger than the others. They were out for at least an hour. You were only out for fifteen minutes.”
Others? How many others had Talith brought here? And why? The girl was not a goddess like Talith, but she wasn’t so unattractive that no man would submit to her without being abducted and collared. And her eyes… The golden color mesmerized him. He would fuck her if the circumstances of their meeting were different. He should have known mother Sempire wouldn’t leave him alone with her daughter totally unprotected.
“What’s wrong with you?” He didn’t give a shit, but he needed to gather all the information he could.
She grimaced. “It doesn’t matter.”
“It matters to me. I’m the one who was abducted, collared and locked in this room with you.”
“I’m sorry about that,” she said. The sincerity in her voice surprised him. “My mother is determined to help me.”
“And my semen will help you?”
Finally, she blushed. 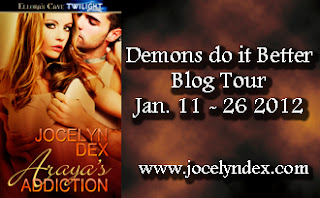 Posted by Denysé Bridger at 7:00 AM